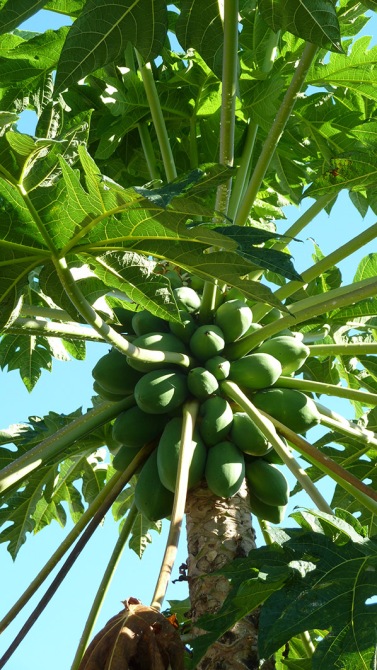 Last year we reluctantly pulled out the last of our pawpaw trees.  This was because we were not able to keep the black spot fungus under control sufficiently to be able to harvest fruit of a quality we were prepared to eat.  It was a very difficult decision because there is nothing more delicious than a tree-ripened pawpaw.

This tree and another which we dug out few years back were planted ten years ago and probably gave us about a tonne of fruit over that time.

The black spot fungus didn’t show up in the first 2-3 years, and during that time it was not unusual to have more than 20 fruit on each tree at one time, and to harvest a fruit every couple of days at the height of the season.

However, once the fungus became established for many years we were harvesting smaller than normal fruit which did not have the full “ripe pawpaw” flavour and was infected with white spots which we cut around.

We tried a range of approaches to controlling the fungus, including spraying with wettable sulphur and Seasol.  Unfortunately without any clear guidance as to how often to spray, and without any certainty that these were the correct measures to take, combined with long periods away from home, we didn’t persist with any particular regime.

However we did get the impression that both the sulphur and the Seasol had some beneficial effect, but only in the presence of good soil health and regular fertilizing.

Today I came across a post on Jerry Coleby-Williams’ website on how to fortify your pawpaw plants to better withstand the effects of this exotic fungal disease caused by the fungus Asperisporium caricae.

What he recommends is a combination of:

Jerry emphasises that well nourished pawpaws are more important for disease control than spraying. Go to his website to see what he prescribes in detail, particularly the advice on the  nutritional requirements for pawpaws.