I have to admit that I have not found good information anywhere on how to prune Dragon Fruit.  What I am going to tell you here is a result of my own “trial and error” approach over several years.  It seems to work for me, but who knows whether there is a better approach that I don’t know about that might yield a whole lot more production.

Our plants are around 4 years old and last year they produced over 40 fruit (I stopped keeping records after 40, so the total could have been over 50).  Probably because of our cool and dry winters our Dragon Fruit go dormant in the winter, with very little new growth and no flowers.  Fruit is produced between January and June.

We had the first bud on our three plants on 6 December, and it flowered on 18 December this year, though I didn’t get around to photographing it until yesterday (21st).  This was three weeks earlier than the first flowering last year.

On the 20th I carefully counted all the buds that had appeared since the 6th – in two weeks we had gone from one bud to 29.

These plants were partially pruned in November, but then I got too busy to finish the job.  But this has given me the chance to think about the effect the pruning might have had on bud location, though this is all guess work and observation – no evidence-based theory here.

A range of buds, from just appeared to on the way to flowering.  Note the ants on the bud.

What I am seeing this year is similar to what I have observed in other years.  The most buds (by far) appear on downward growing branches.  In addition, there are far more buds on branches that have been pruned (whether the pruning was done by chopping off the branch through the green section or cutting it off at a node) than on un-pruned branches.

As you can see in the photo above, ants take a great deal of interest in the buds, but they do not seem to do them any harm.  I suspect that the buds exude something that is useful to the ants, and maybe in return the ants discourage insects that may be harmful to the bud.  Does anyone have any information on this?

It doesn’t seem to matter whether the pruned branch has grown some more branches at the pruning point.  Many of the branches I pruned in November have done this, but they still have buds on the pruned section – and not on the new, un-pruned branches.

Another factor to think about (maybe before you plan your Dragon Fruit planting) is whether you will grow them on poles with spreader frames on top or horizontal beams.  You can see a short discussion here.

If you are just starting out with Dragon Fruit, remember that they should not be pruned until they are at least one year old, and ideally not until they have had one good flowering and fruiting season.

If you are looking for more information on Dragon Fruit, have a look at the links at the end of the this post from the end of 2014.  And if you want to see the layout of our vege garden have a look at the two plans in this post. The first shows how the vege garden fits into the overall plan on our narrow ridge top.  Scroll down for a more detailed plan of the vege garden.  The Dragon Fruit are growing in Hugelkultur Shadehouse No.1. 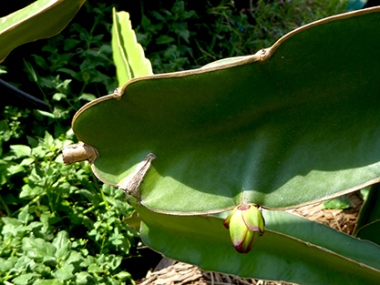 Branch pruned at the node

Bud a few days old. The ants seem to take an interest in them right from the time they form 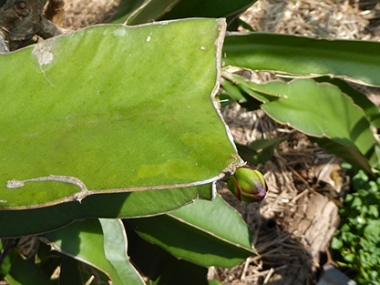 Branch pruned by chopping through the green section

One morning last week I went out into the garden early to see how the Dragon Fruit buds were going.  The day before I’d had to go to Brisbane for the whole day and didn’t get into the garden at all.  I’ve been expecting any day to see some flowers from about 10 advanced buds.

There were four flowers that had opened during the night – and another five that must have flowered the night before and were now limp and closed.  That’s on top of the two fruit which are developing from a flowering a few weeks ago.

Early morning flower, with some of the previous night’s flowers in the background.

It had been raining quite a bit the night before and for a couple of days before that, but I was still a bit surprised not to see any of our native bees around the flowers.  Normally they would each have had a cloud of bees busily pollinating.  No problem to hand pollinate them, making sure to cross pollinate between plants because it’s said to increase the fruit size.

There were still a few buds which looked to be close to flowering, and when I checked the next morning one more had opened.

This time there was the expected swarm of native bees busy pollinating.

So that’s ten flowers in three nights, and there are still probably another six buds developing.

Some of the buds that are still developing

Not bad for just three plants on a less than ideal trellis set up.  It looks like being a good year for Dragon Fruit, considering that this is only early January and we had fruit up until April last year.