One of the key characteristics of a sustainable system is resilience.  A good working definition of resilience is ‘a built-in ability to avoid or recover from an impact or disturbance’.  In the natural world (I’m including vegetable growing as part of the natural world, bit of a stretch perhaps) resilience can be manifested at many scales, from the overall system right down to individual species.

In food production systems we should always be striving for resilience, and this becomes more significant as we begin to bear the brunt of climate change.  The fundamental weakness of agro-industrial systems of food production is that they have sacrificed resilience in the quest for greater short-term profits.

You might recall that some time ago I referred to my experiment in restricting pumpkin vines to around one square metre, after advice that they would be likely to be as productive if confined by pruning to that small area as they would  be if allowed to “free range”.  Because free range pumpkins take up such a lot of space I’m keen to prove that the “area restricted” approach works.

Unfortunately I didn’t reckon with the impact of heatwaves (or, more accurately, I didn’t respond quickly enough when we experienced a major heatwave over the last few weeks, with temperatures up to 38 degC. and quite low humidity).

Here’s what it does to a pumpkin vine: 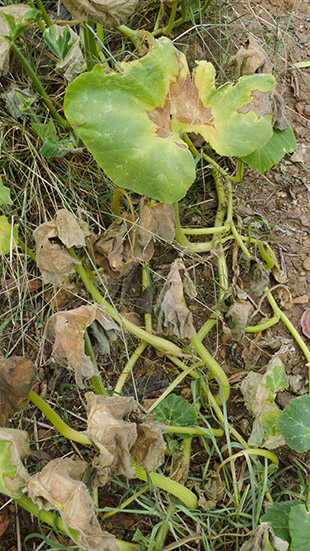 Not pretty, and not boding well for a plentiful harvest.

This vine was planted in the corner of the mulched area under a lime tree, and has been more or less restricted to one square metre (it’s probably more like 1.5×1.5m now).  Another part of the vine scrambled across the mulched area directly under the tree.  Here’s what it looked like at the time the above photo was taken: 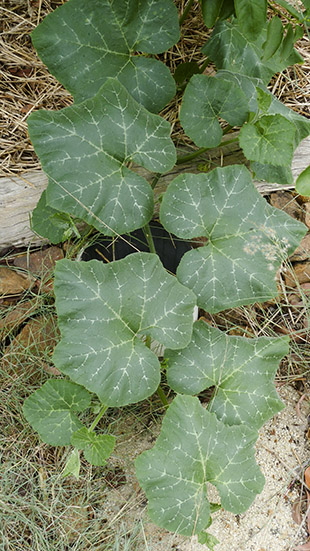 Strangely enough, even where it isn’t directly under the shade of the lime tree it isn’t sunburnt.  Maybe having the majority of it in shade gave the whole runner some greater resilience.

Lesson:  have structures ready for hanging shading material, so that it can be installed when there is the first hint of unusually high temperatures.  That’s another kind of resilience – being ready to respond to inclement situations so as to avoid negative impacts.

It’s not that I wasn’t aware of this kind of impact, just that we haven’t had really hot weather for four or five years, so I had taken my eye off the ball.  No excuse, I’ve been following Scarecrow’s Garden for a long time and, being in the mid-north of South Australia, she has many strategies for dealing with hot weather.