Yep, it’s been a long time between posts.

Lots of reasons: severe damage to arm muscles and tendons fighting fires last October, leading to difficulty doing most things; very severe wet weather, requiring track maintenance and other out of the ordinary chores; needing to set up bibliographic database for someone special; finding new data sources and getting engrossed for a few weeks in researching a period in my father’s life for the biography I’m preparing on him; etc.etc.

It has been wet, wet, wet.  We’ve had 565mm of rain to the end of February.  That’s nearly 75% of our average annual rainfall, and the highest January-February total since we started recording rainfall here in 2007.  Even in 2011, when we had the Grantham and Toowoomba floods in the area, we recorded only 505mm.

A pretty typical view from the porch in January and February

Now the wet weather seems to have gone for a while (give or take a cyclone hanging about some distance off the NE Queensland coast and uncertain whether to visit us).

A lot has been happening since my last blog.  Lots of days when we couldn’t go anywhere, either because the creek crossing was so far under rushing water that there was no way any sensible person would try to cross it, or the crossing had been so trashed by said rushing water that even our Subaru would have done itself some damage trying to cross.  Not that we were hankering to go anywhere – there’s always the feeling when we set out down the hill of “Why am I leaving all this peace, beauty and rampant nature – even for an hour/day/whatever?”

Once the rain seemed to have eased our good friend and neighbour, John, dropped by with his tractor and repaired the crossing.  For most of January and February the Subaru had been parked on the street side of the crossing, so that when the water was low enough to wade across we could get into town. 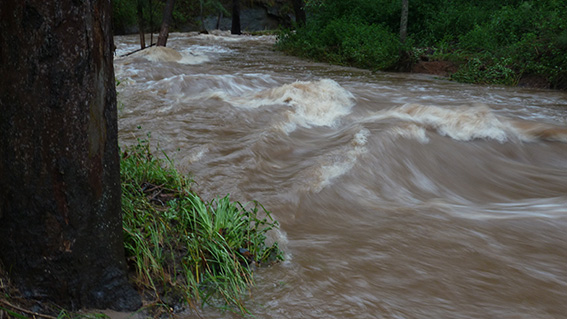 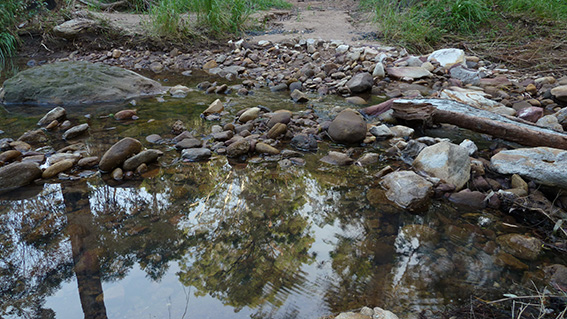 The state of the crossing once the water went down 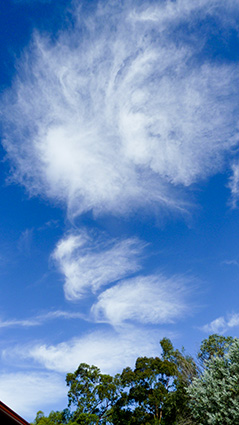 But it’s officially Autumn.  And to prove it we have official Autumn skies – deep blue, fluffy white clouds – clear night skies with myriads of stars that jump out against the blackness.  Nearest street light must be three kilometres away, and while we can see the glow of Brisbane in the east and Toowoomba in the west on the horizon, they have virtually no effect on our star-viewing.

Now to get back into the vege garden and get the grass under control.