Pretty quiet month for birds, not necessarily because there weren’t many birds about – just that there wasn’t much time devoted to watching and/or identifying birds.  Seventeen species listed, out of 58 species that we’ve seen in the ten years we have records for March.

We did see two bird species that we hadn’t seen here in March: Golden Whistler and Spotted Quail-thrush.

The Spotted Quail-thrush is a species that we don’t see very often. They are quite shy, spend most of their time on the ground with a preference (here at least) for relatively sparse groundcover in rocky areas, and are likely to walk away quietly when disturbed. 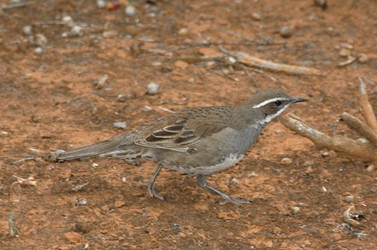 The one I saw in March flew in straight and low and landed on a heap of Acacia logs just in front of me, with an alert, almost “Road Runner” look, before flying off almost immediately

The Golden Whistler sighting extends our records of this species by one month – previously April to August, now March to August.

Of the 15 other bird species seen, 12 have been seen here in every month of the year, including the Yellow-tailed Black Cockatoos which were very active throughout the month.

Welcome frog sightings were the Graceful Tree-frog (Litoria gracilenta) – under the light outside the front door, instead of its usual very elegant pose along a slender branch with its legs tucked up under its body –  and the Green-thighed Frog (Litoria brevipalmata).

One of our favourite reptiles was common in March. Burton’s Snake-lizard (Lialis burtoni) seemed to be everywhere.  This is how they are often seen:

They often seem to be hoping that their somewhat cryptic colouration will keep them from being seen – though in fact I think they are often sitting in wait for some prey to come along and just choose to ignore the temporary human disturbance.  In fact we had one in March that kept up an “ambush” pose on the ground under the bottom rung of a ladder while we were up and down replacing hot water system tubes for half an hour or more.  Another was seen sunning itself on a railway sleeper on the edge of a garden bed, within less than two metres of us watching from the window, and within two metres of a Red-necked Wallaby and her joey grazing on the garden bed.

Burton’s Snake-lizards are an amazingly adapted lizard.  Their main (only?) prey is other lizards, and they have modified their body shape to be able to get into crevices where skinks and geckoes like to hide.  Their jaws are elongated, to be able to grab and squeeze their prey, and the top jaw hinges where it joins the skull.  I think this is so that they can extend their gape to get an even pressure between the two jaws.

This one was lurking in the grass and I nearly stepped on it.  Just as I saw it, it darted forward to grab this skink.  It’s first grip was across the back, but it quickly flipped the skink up in the air and caught it across the chest, holding it tightly until it suffocated.  You can see the line of the upper-jaw hinge just behind its eye.  Once the skink had ceased struggling the Snake-lizard moved so as to get the skink’s head into its mouth. 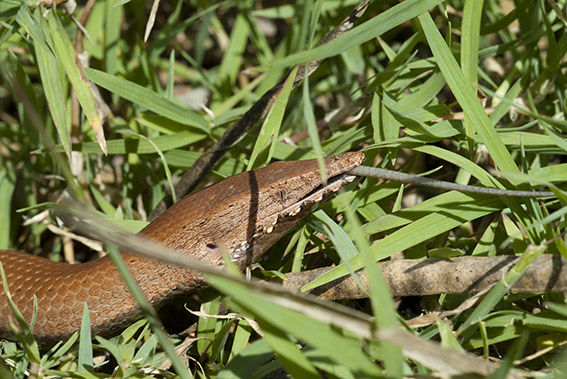 Within five minutes there was only the skink’s tail protruding from the its mouth, and five minutes later it went off, no doubt to find somewhere safe to rest and digest its meal.

Now let’s see what April brings by way of wildlife.

One thought on “March wildlife”