I’ve been thinking about the potato production in our strawbale garden trial: 2.5kg from 0.4 square metres, or 72.5 tonnes per hectare. 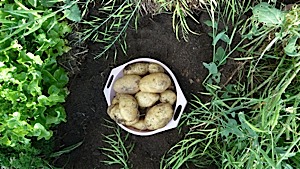 I’d be crazy to think that the productivity I got in my small patch could be obtained consistently over one hectare, right?  Well …. no.  That rate of production represents what was, in 2012, the world record for organic potato production (72.9 tons/ha), harvested in Darveshpura village, in the Nalanda District of the Indian State of Bihar.  The current record is 108.8 tonnes per hectare, grown February this year in another village in Nalanda District.

The point is that this is yet more proof that “backyard”, organic, permaculture, call it what you will, agriculture can be highly productive on a per hectare basis, compared with broadscale agriculture.  The main difference is in the input of labour; I was there every day, alert to whether conditions were right, or pests were establishing a hold (none did).  As the old Japanese proverb says: the best fertilizer is the farmer’s feet.  However there’s a more modern observation that could also be relevant, and that is Clifford Geertz‘ “agricultural involution”, a term he gave to the increasing productivity of wet rice agriculture (and associated crops) in Java and Bali as more and more people were forced to depend on the same area of land under Dutch colonial rule.  More labour resulted in unexpectedly large productivity increases from small areas, though the sad outcome for the people at the time was that in the end the increase in production could not keep pace with the nutritional needs of the increasing number of people made dependent on the same area.

Modern high input agriculture has worked in the other direction, decreasing the labour input and replacing it with the power extracted from fossil fuels, whether in the form of mechanization or as industrially produced fertilizer.  Dependence on fossil fuel is more and more being seen for the fool’s gold that it is.  Not only is it a finite resource, but it produces greenhouse gases that lead to global warming, and the artificial fertilizers lead to unhealthy (some say dead) and eventually unproductive soils.  Sooner or later, there are going to be a lot of people who are using labour-intensive approaches to growing food for themselves and others, and that’s when we’ll see the productivity per hectare in the Western world really increase.