Twenty-nine species of birds this month.  As usual, probably nowhere near the total that were somewhere on the block, but unless we have time get down into the gullies regularly there must be a lot of species that we miss.

Funny how the count is generally in the high twenties, even though the actual species recorded varies from month to month.  There are the “stayers”, such as the Buff-rumped Thornbills, White-throated Honeyeaters, Eastern Whipbirds, Pied Currawongs and Rainbow Bee-eaters to name just a few.  However I suspect that even among some of these, it isn’t the same birds staying throughout the year.  For instance, even though the White-throated Honeyeaters are seen in every month, in some months there are birds present which clearly have  broader white band around their nape than the usual individuals.  A migratory sub-species?

Apart from the arrival of the Channel-billed Cuckoos (or to be precise, the first calls for the season – they may have arrived earlier and just not been calling), there were a few other highlights. The first territorial challenge calls of the Tawny Frogmouths for the season, for instance. This call had me baffled for years.  It’s a very low-pitched, “pumping”, oom-oom sound. So low-pitched that sometimes I think that I feel it more than hear it.

I couldn’t find a description of the call anywhere and no one I described the call to could come up with a reliable identification of the species. Then a few months ago our friends Richard and Kathryn Johnson were here and I played a recording of the call to them.  They burst our laughing.  Richard and Kathryn have lived with Ed, a flightless Tawny Frogmouth for more than 30 years, since he came to them as part of Kathryn’s wildlife rescue and recovery work in Townsville.  Apparently Ed’s presence in wild Tawny Frogmouth territory elicits territorial calling duels with exactly this call – sometimes with the wild bird standing on top of Ed’s cage and both of them calling at top volume.

Now that we know what the call is we can actually “census” the Frogmouth territories in our neighbourhood, because once one starts up the birds with neighbouring territories will start calling too.  This kind of very low frequency sound carries for a long distance on the night air. 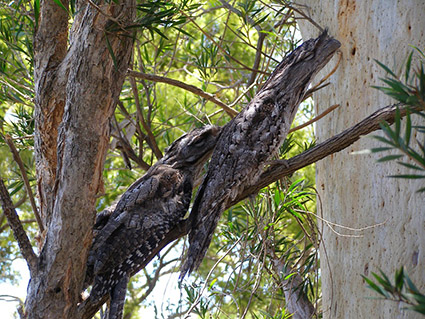 By the end of September the Eastern Yellow Robins weren’t coming around the garden nearly as often as they did in August.  We’d see them perced sideways on trunks in lookout-mode, or working their way through the foliage in search of insects, but now we generally only hear them in the dawn chorus and they are probably spending their days in the (slightly) damper gullies.

We didn’t see any Jacky Winters this month, though our records show that they can be seen here in most months and they were very common in August.

One thought on “Birds in September”