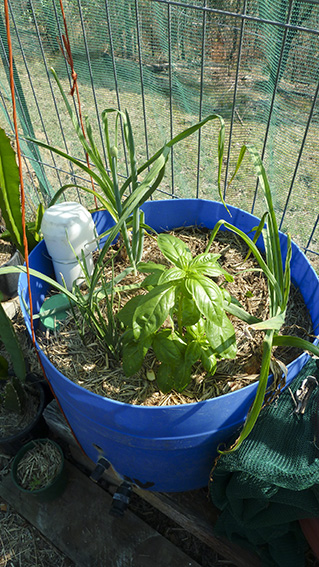 We first started to investigate wicking pots during a seven-year drought we experienced between 2001 and 2008. At that time we were dependent on one 3,000 gallon tank for all our water needs, including the garden, though we were recycling treated greywater to the fruit trees for part of that time.

The theory behind wicking beds is simple.  Water will generally wick up most soils to a height of around 300mm.   So if water is supplied to the plants via a reservoir under the soil layer, then it will wick up the soil, and if the soil surface is more than 300mm above the water then the surface will not be wet, and there will be little or no evaporation.  Thus the only water that should be lost is what passes through the plants by transpiration.

Because this was a bit of an experiment we decided to try it first with pots, before moving on to a wicking bed, though we did make the base for the wicking bed at the same time we made the first wicking pots.

My first impressions when I thought about the design of wicking pots / beds was that it seemed like the perfect situation for creating anaerobic processes (i.e. without oxygen) that could result in some pretty horrible smells, not to mention bad impacts on the plants. 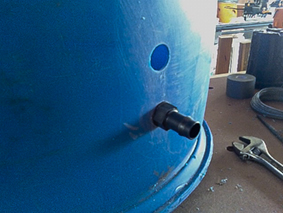 Using half a 200 Litre barrel

The first design had a drain approximately 100mm above the bottom, so that excess water (e.g. rain, or forgetting to turn the hose off when filling the reservoir) didn’t flood the roots of the plants for too long.  Just in case this drain got blocked or could not cope with the heavy storm rains we get from time to time, another drain was added above this. 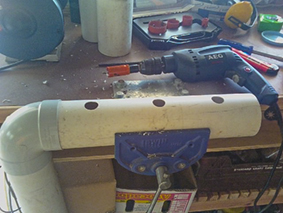 The recharge pipe is made from some off-cuts of 90mm downpipe and a spare elbow, with holes cut in the bottom to allow an even distribution of water. 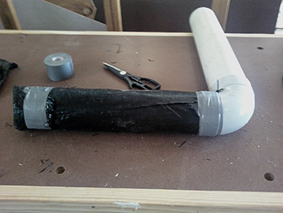 The bottom section was then wrapped in weed mat to keep soil and roots from getting into the pipe. 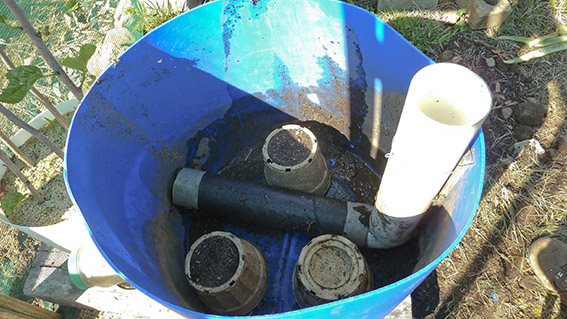 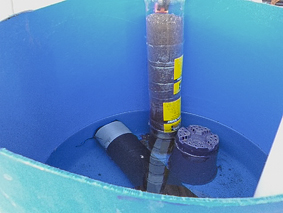 Test of wicking with soil mix

Before the pot was filled with the intended medium a test of its wicking capacity was done using some cut-off soft drink bottles – the wicking height was pretty close to 300mm.

For the first trial I filled four pots with a sandy loam with a good amount of compost and some coconut coir fibres to increase the water retention capacity.  Early results were very encouraging.  Plants thrived, and on hot days when the same plants in adjacent non-wicking pots were wilting, those in the wicking pots were showing no signs of stress.  But then, after about four weeks, things started to go wrong.  Leaves of tomatoes and basil started to lose their rigidity, going a dark green colour and “collapsing”.  Those species that didn’t show these symptoms just failed to thrive.

I removed the plants from one pot and dug out the soil.  Before I got to the saturated layer there was a very strong smell of rotten eggs. Hydrogen sulphide – the tell-tale sign of anaerobic processes.  When I did get down to the saturated layer I was surprised to find some areas of shiny black soil – pretty clearly some kind of metallic sulphide deposit, and a sign of extreme anaerobic processes.  Much worse than my early misgivings had led me to expect.

What to do?  Clearly there were likely to be two aspects to the problem – a primary cause:  no, or too little, oxygen was getting to the saturated layer; and a secondary cause: too much nutrient in that layer, leading to rapid consumption of any oxygen that did reach the saturated layer.

I’d been reading about water treatment processes and about biochar at the time, and both of these mentioned the way in which the capillaries in charcoal provide habitat for an amazing range of organisms that consumed excess nutrients as well as promoting healthy soil.  Maybe charcoal would make a good medium for the saturated layer, and could possibly be combined with a routine of regularly changing the water in this layer so as to drain away any developing anaerobic products.

Possible solution:  Keep the reservoir full, only provide plant nutrient at the top of the soil layer and water it in only after the reservoir had been filled.  Draining the reservoir every few weeks (add another drain with a tap at the bottom of the wicking pot) should help prevent an anaerobic situation from getting out of control.

But why don’t most other people seem to experience this problem.  I suspect that it is because the surface to soil volume ratio in the plastic barrels I am using is much less than one finds in, for example, a raised garden bed, a bath tub (often used for wicking pots), or a wicking bed.  That higher surface area to soil volume ratio allows more oxygen to penetrate to the saturated layer.

Some people do report bad smells – have a look here, and at the response by Scarecrow (who knows a thing or two about gardening generally, including wicking beds).  She says: “When I built the in-ground beds I filled the base (‘pool’) area with sand or a sand and gravel mixture. There is little organic matter in these mixtures so there is little to ‘break down’ to cause odours.”  So my theory about anaerobic decomposition of nutrient in the saturated layer is probably right.

By and large this has been successful, as can be seen by the photo above of the garlic, basil and clumping leek. 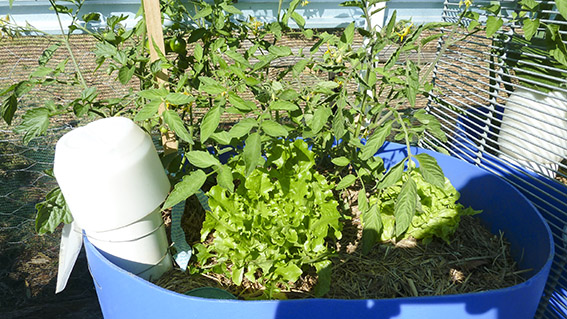 Tomato, rocket and another lettuce variety 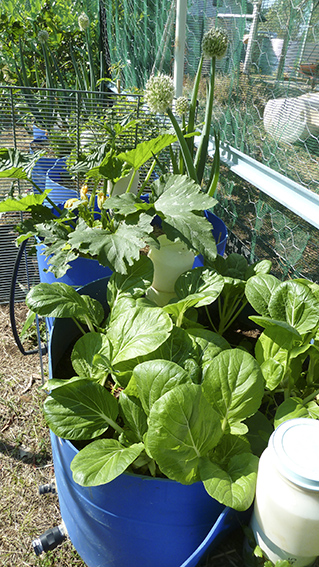 Does anyone know what the plant in the foreground is in this photo?  It was given to me as gai laan (Chinese broccoli) but so many people have told me that it isn’t gai laan I’m now convinced.  Some Indonesian friends (who showed me real gai laan to convince me this isn’t it) call it “chi asem”.  I can’t find an English name for Chi asem, but I suspect it is non-hearting Chinese cabbage (wombok) [I later discovered that it is Pak Choy].  It loves wicking pots, as do spring onions.

Zuccini grows really well too, and flowers and sets fruit, but then the small fruit goes rotten and drops off. Too much water?  Wrong pH?

In general it seems that plant roots move downward in wicking pots till they reach their optimum level of saturation and oxygen.  As you might expect, water plants do particularly well.  I’ve currently got water celery (Oenanthe javanica) in a wicking pot and it is thriving.  This plant can grow in water or in damp soil, though in water it has a less bitter taste and its “celeryness” is clear. [We stopped growing Water Celery when the extent of its “weediness” became clear].   Kangkung (Water morning glory – Ipomoea aquatica) also does well.  In Southeast Asia it grows in damp soil or in water with its stems floating on the surface.

Here are a couple of links to more information on wicking pots and wicking beds:

17 thoughts on “Wicking pots and beds”