Over the last few weeks I’ve been gradually doing some “maintenance” on the wicking pots.  They have been a bit neglected since we started getting good rainfall at the end of last summer.  I had a lot of work to do to construct raised beds in the shade tunnels, and over winter these were generally more productive than the wicking pots as well as representing a much larger surface area for food production.

However the low rainfall over winter, and the lack of any signficiant rain for nearly three months has meant that we have to start managing our water supply (all rainwater in tanks) even more carefully than usual.  I’ve almost stopped watering the raised beds, and at least half of them are under a thick layer of barley straw, with nothing growing in them. It’s at times like this that the wicking pots come into their own.

The ongoing maintenance of the wicking pots amounts to regular fertilizing with alternating applications of worm tea (diluted to 50%), cow manure tea (10%), and (especially for leafy crops) diluted urine (10%).  They also get occasional surface applications of the sludge from the cow manure tea production, and of course regular topping up of their mulch to control evaporation.

Over time I find that the soil in the pots becomes somewhat “compacted”, and some crops establish such a dense root mass that it is nearly impossible to dig into the soil.  These issues are evident from a gradual decrease in their productivity and in the “health” of the plants. 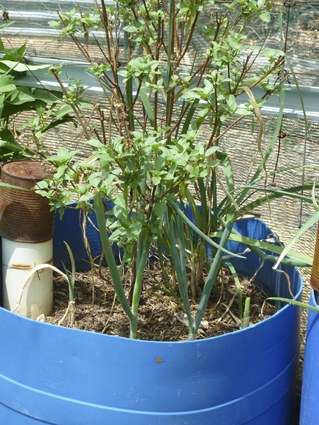 Thai Basil and Spring Onions. The basil has already gone to seed after a long period of lush growth. After harvesting the seeds I pruned it to stimulate some new growth, so as to get more production before I am ready to replenish the soil. 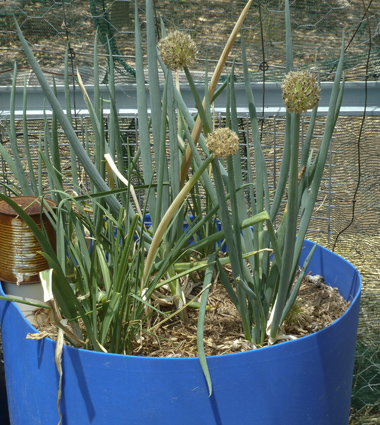 I’m not sure how long these Spring Onions, Clumping Leeks and Clumping Shallots have been in this pot – it’s certainly more than 18 months. They’ve been harvested regularly by cutting the stems off at soil level. Now they’re starting to look a bit tired, so I’ll replenish their soil in the coming weeks.

For these reasons I like to take out the soil every 12-18 months and combine it with a mix of sandy loam from the drains on our access track, chipped horse manure, and fresh compost. 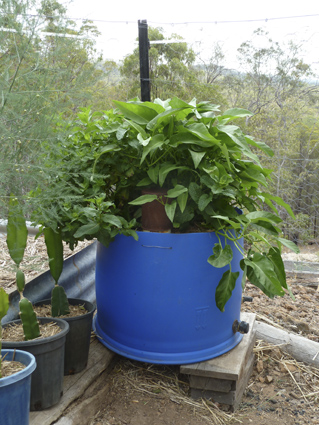 This pot was rejuvenated in early September (about 12 weeks ago) and planted with Kang Kung (Ipomoea aquatica) and Mint (on the left, partly obscured by the asparagus). Both have grown rather extravagantly, the Kang Kung more so than the mint because it responds to harvesting by becoming even more productive. The Mint was a bit of a mistake because I just noticed that it is popping up throughout the whole top of the pot – that’s what mint does, I just forgot about it. I removed the mint after taking the photo.

The experiment mentioned in the heading of this post refers to an attempt to find a way of using discarded “florist pots”.  These come in various sizes and are like an overly tall plant pot without any drainage holes.  Florists keep their cut flower stock in them.  They are too tall to use as plant pots because the top of the soil gets dry while the bottom is still saturated.  So I thought I’d do a quick experiment to see how they go as wicking pots.  I just drilled four drainage holes around the sides about 250mm from the top, stuck a 500mm bit of offcut plastic water pipe down the side, filled up to this line with charcoal (leaving a depression so that the soil layer extends below the drainage holes) covered it with geotextile and added potting mix.

All I had available to plant in them was some Lemon Grass that I had to move out of a raised bed, so I put single stems of that into three of these wicking pots and also into three normal plant pots.  Four weeks later two of the wicking pots have thriving clumps of Lemon Grass (the third has been a bit slow to get going) whereas in the normal plant pots it is struggling to survive.  All have been given applications of diluted urine. 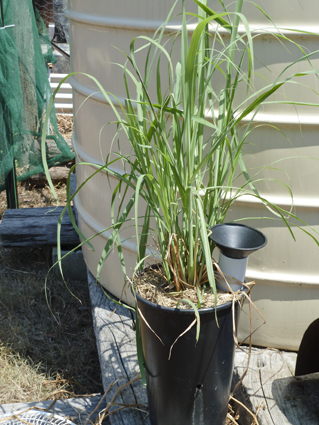 Lemon Grass thriving in a simple wicking pot. One of the four drain holes is visible. I won’t leave it in this pot because it isn’t wide enough to let the Lemon Grass grow into a large and productive clump, but it shows that the principle works.

The “funnel” makes it easier to fill the intake and also helps to reduce evaporation.  It’s a recycled thread spool from Reverse Garbage in Brisbane.

You can see my original long post on making wicking pots here and a modification of that design here.

Do you have any novel ways to share for making or using wicking pots?  What kinds of veg do you find grow well in them?

One thought on “Wicking pot maintenance and a recycling experiment”